I posted an urgent call to action last night about Baby Tinslee - the latest intended victim of TADA. I have some updates for you and rather than update that post, I thought I'd just create a new post.

CBS11 had this news story about Tinslee last night:

About half an hour ago, Robert Montoya who is the Metroplex Bureau Correspondent for Empower Texans, reported as follows: 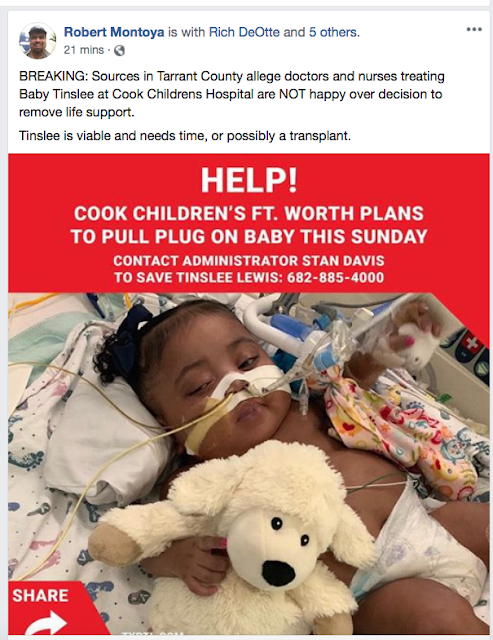 Not only that, Ross Kecseg, also with Empower Texans, reports in a comment to Robert's post, that Representative Tony Tinderholt, who has been at the hospital today:

That's just outrageous behavior on the part of the hospital. If the hospital has it's way, this is Tinsel's last day and they want to tell the mother whether or not she can photograph her child! I hope you're seeing a pattern emerge here.

But note this from my friend, Yvette DeOtte, who is quite plugged in here:

Let's go back to what I said last night about motivations:

NOTE: Anticipating what TADA supporters always say in defense of these things, let me nip that in the bud. There are no assertions that anyone's conscience is being pricked by continuing to care for this child. I have never heard that used in a hearing as a reason. That only ever comes up during legislative testimony by lobbyists for euthanasia and the occasional brief in court. Even were that the case, there are many, many doctors in the Dallas/Fort Worth Metroplex. Other doctors who are pro-life and understand who makes what decisions would continue care for her, I am certain.

Anticipating another thing they might say - she's suffering. Actually, that was not a given reason. Also, killing people because of suffering is the very definition of euthanasia. Yeah, it is. Mercy killing is also, ironically, prohibited by TADA. See Tex. Health & Safety Code Sec. 166.050.

Anticipating and responding to what others have said or asked about the role of money here, let me address that as well. Doctors and hospitals always vehemently deny that money plays any role in any decision they make. In one place on social media, one lady said she called and mentioned money and the receptionist defensively said money had nothing to do with their decisions. I've been in cases where the intended TADA victim had insurance or would qualify for Medicare or Medicaid soon if given enough time. To be honest, I actually don't think money is the biggest motivator for these cases for the decision-makers.


If a doctor doesn't want to treat, there are clearly other doctors - at that facility - who would. More than that, if this facility wants this kid out - if she's costing them too much money or whatever - another facility will take her. With more time, additional facilities likely could be found. So, why be dead set on pulling the plug today? Why indeed.

It's not at all clear to me who is making the decision and pushing this. But it doesn't matter. The facility has made this decision. And a child's life hangs in the balance.

Please keep calling and praying. If the voicemail is filled up - as I've been told it is - then leave messages at the main number.

Call Cook Children’s now!  Ask to speak to administrator Stan Davis and tell him to save Baby Tinslee Lewis! 682-885-4000 or stan.davis@cookchildrens.org.

Email ThisBlogThis!Share to TwitterShare to FacebookShare to Pinterest
Newer Post Older Post Home
❤️☦
"We err, if we err at all, on the side of life. Always." --Kassi Dee Patrick Marks, JD
"I want the truth!" --Daniel Caffey, A Few Good Men
"Once avoiding suffering becomes the primary purpose of society, it too easily mutates into license for eliminating the sufferer." --Wesley J. Smith