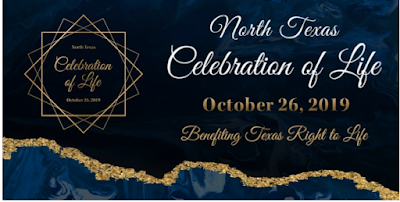 UPDATE: Listen to this little preview of what Rep. Stickland has in store for us at the dinner Saturday night. You can still get tickets, so run over the the Texas Right to Life website and do so right this second!

In my last post I mentioned my family was going to the 22nd Annual Celebration of Life in Houston. We went and it was truly a fantastic experience! I make a few comments about it below, but my friend, Charlie Johnston, posted a nice write-up about the evening and also some additional information about his visit with the great people of TRTL. Rather than reinvent the wheel, I recommend you head over there and read it for yourself and acquaint yourself with his most excellent blog. Toby and I were pleased that we were seated with Charlie and enjoyed all those at our table very much. We were also able to visit with and get to know many other TRTL supporters from all over the state. It's amazing the loyalty people have to this organization and it is clearly because those in the know know who can be trusted - who is really working to save all Texas lives - and who are charlatans undermining the cause...and worse! They understand the urgency of the mission and are clear on all the issues. It was refreshing to me to talk to so many who just "get it." After a session like we saw, one needs such soothing balm for one's soul. Things in the Capitol are not representative of what goes on IRL ("in real life" as the kids say).

Now it's time for the North Texas Celebration of Life which is already in its 4th year. Here are the details and you can click the orange words just before this to sign up. 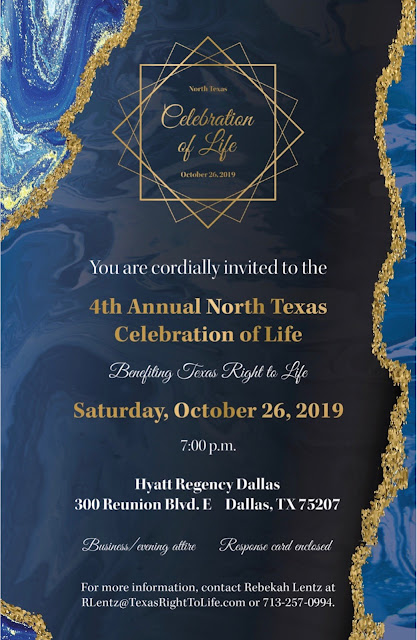 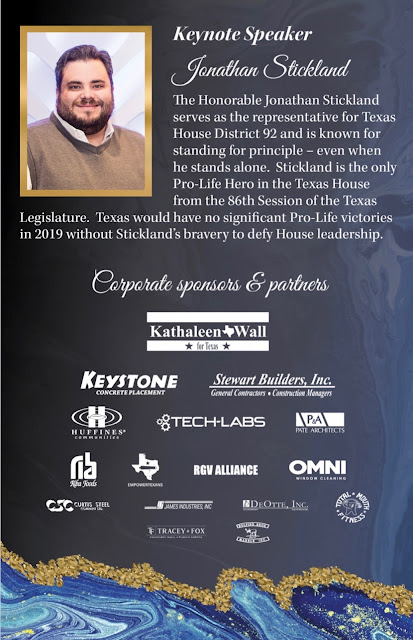 Toby and I have gone every year and will be there again this year. I'm still so excited that TRTL is having these celebrations in a growing number of locations so more and more truly committed pro-life Texans can get together and celebrate victories, but also plan for the future. TRTL has some big plans for the future and has gone all in for life - all life. No other organization in Texas can say that.

As you can see, Rep. Jonathan Stickland will be the Keynote Speaker. I am eager to hear his take on this disastrous past session. It is inexcusable that nothing of significance was passed. The House was the holdup, of course; despite his best efforts. We will miss him. Many have called for a Special Session to pass some pro-life (and other freedom and Constitution affirming) legislation but Gov. Abbott has so far said no. I never had much confidence in him. He has proven me right. Time and again.

I am also eager for North Texas attendees to hear about TRTL's plans and recent changes they've made. I am certain that we are living in a time of special tribulation. It's palpable and it's not just American politics or dysfunction in the Roman Catholic Church and some of the other major Christian denominations. Its everywhere and everything. This is not a time for timidity, cowardice, and for making deals with the devil. The lukewarm will be spit out; as well they should be.

Rafael Cruz was the Keynote Speaker for the Houston Celebration of Life. He is not lukewarm, nor is he timid, cowardly, or confused on any issue - least of all life issues. The part of his speech that got to me the most was when he spoke from Ezekiel 22, specifically verse 30. But here is more of that chapter to give you context:

23 And the word of the Lord came unto me, saying,


24 Son of man, say unto her, Thou art the land that is not cleansed, nor rained upon in the day of indignation.


25 There is a conspiracy of her prophets in the midst thereof, like a roaring lion ravening the prey; they have devoured souls; they have taken the treasure and precious things; they have made her many widows in the midst thereof.
26 Her priests have violated my law, and have profaned mine holy things: they have put no difference between the holy and profane, neither have they shewed difference between the unclean and the clean, and have hid their eyes from my sabbaths, and I am profaned among them.


27 Her princes in the midst thereof are like wolves ravening the prey, to shed blood, and to destroy souls, to get dishonest gain.


28 And her prophets have daubed them with untempered morter, seeing vanity, and divining lies unto them, saying, Thus saith the Lord God, when the Lord hath not spoken.


29 The people of the land have used oppression, and exercised robbery, and have vexed the poor and needy: yea, they have oppressed the stranger wrongfully.


30 And I sought for a man among them, that should make up the hedge, and stand in the gap before me for the land, that I should not destroy it: but I found none.


31 Therefore have I poured out mine indignation upon them; I have consumed them with the fire of my wrath: their own way have I recompensed upon their heads, saith the Lord God.

It was the second or third time in as many days I'd heard that verse referenced though the contexts were varied. How interesting. When there is that sort of synchronicity, I suspect God is trying to tell me something. I try to pay attention and figure it out.

Among other things, Rev. Cruz observed that there are very few "standing in the gap" particularly on life issues. He rebuked pastors and others for not doing more. And, he praised Jim and Elizabeth Graham for standing in the gap for all of us. It is a heavy burden that they and their tireless staff wear well. But it is a heavier burden for them and the rest of the true pro-lifers because of the wolves in sheep's clothing that lurk about not just undermining their efforts, but calling evil good and good evil who sow confusion among the grassroots and politicians and even certain religious "leaders." Truthfully, however, I suspect that with regard to the latter two there is less confusion among them and it is really more a matter of just believing in and promoting evil as I am increasingly certain is the case with the faux life groups given their public advocacy and written statements about things. Perhaps some are simply behave cowardly, but I don't think that explains everything - nor is it an excuse. The net result is that lives have been and continue to be lost that do not have to be - and would be - if there was honesty and commitment to the claimed mission. They are not standing in the gap. They are even trying to prevent others from doing so. God help them.

TRTL has decided that it is now a Christian organization and not one just governed by Natural Law as it had been in the past. This is big. Much bigger than it might appear. TRTL has taken on a serious, focused, ambitious mission to protect more lives in Texas. They need every grace they can receive to do so. They are just as grateful for those praying for their mission as those giving financially and of their time. Not everyone can do everything all the time. Prayer is as much a part of this as anything. The spiritual attacks come for all of us - but perhaps none more so than clergy and those in the pro-life battlefield.

TRTL understands - as it always has - the need for God's help in this fight even as they are more than happy to work with pro-lifers of all faiths or none at all. I pray for their protection, success, and God's graces for them personally, their families, and in what they do that helps each and every one of us. Likewise, I pray for those lost on pro-life issues, especially those running other organizations that claim the mantle of pro-life as they work to dismantle good legislation and fight against protection for people at all ages and stages of life.

Make no mistake about this either: There are demonic elements to the Culture of Death - from abortion to euthanasia - including the legal involuntary passive euthanasia in Texas that is found within the Texas Advance Directives Act ("TADA"). No one can support these things without promoting and inviting a certain evil into their life. They may not even realize it. If they do and don't fight it, well, God help them even more. But it is evil and it must be fought on every level - religious, legislative, judicial, and in our day-to-day interactions with other people. As one fights evil, the evil fights back. It is a serious battle on many levels. Pick a side, but know what side you're really on and know the consequences.

But on October 26 the seriousness of the mission will be accompanied by an exuberant celebratory atmosphere. There is much to celebrate! Come join us! Come meet other like-minded and committed people. I guarantee you, you will meet people who will end up being your friends for life. These are very special people that gather like this. Come learn more about the only organization in Texas working with clear focus to save all lives in Texas from the ever-creeping, insidious Culture of Death. Come learn about the programs they offer from helping pregnant mothers and ill patients in hospitals who are denied care to giving teens and college students (and even law and medical students) the tools they need to be pro-life leaders where they are (and earn some fellowship money as well). Come learn how you can help out. Come get motivated and energized!

I'll see you there!