Carolyn Jones Has Passed Away - May Her Memory Be Eternal 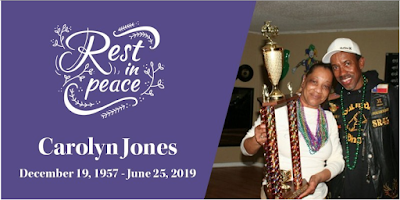 I posted an update about Mrs. Jones recently letting you all know that she had been moved to a long-term nursing facility. I learned yesterday that she has passed away. Texas Right to Life announced it, which I quote in full:


HOUSTON – Carolyn Jones passed away Tuesday from natural causes following her high-profile battle with the Texas 10-Day Rule. In May, a hospital committee pulled the plug on Carolyn against her family’s will, but she lived without a ventilator or dialysis for over 60 hours until escaping the hostile hospital in a private ambulance in the dead of night.
Carolyn stopped breathing early Tuesday morning at the long-term nursing facility in which she resided and was rushed to a nearby hospital. Hours later, Carolyn passed away peacefully – on God’s time, not on a countdown forced by a hospital committee or at a time prescribed by state law.
Carolyn’s husband and daughter, Donald and Kina Jones, labored tirelessly to protect her from death imposed by the 10-Day Rule. The Jones family is grateful for countless concerned well-wishers and supporters who sent love as well as donations to Carolyn’s aid.  The generosity of people from across the United States afforded the Jones family 43 extra days to cherish with their wife and mother whose life would have otherwise been cut short in May. Texas Right to Life is honored to have played some small role in aiding Donald and Kina as they endured this tragic circumstance.
Texas Right to Life requests prayers and privacy for the Jones family, and we pray that Carolyn is at rest now with our Heavenly Father.

I, like Texas Right to Life, am very grateful that Mrs. Jones was able to pass away in her own time, with appropriate care maintained, and not because her care had been prematurely withdrawn in order to hasten her death. I am grateful that she was given more time with her family and they with her. That is how it should be for every patient and family. No one should have their death hastened against their will by the withdrawal of care.

What this family went through to allow that to happen because of the state of Texas law is diabolical and must be stopped. And, for those who accuse those of us who oppose TADA of trying to keep "corpses" alive (appalling, disgusting language I've heard repeatedly, even during testimony by a Catholic hospital administrator "ethicist" in opposition to the reform efforts this session), and including by the Usual Suspects: NOTE that when it was Mrs. Jones' time, it was her time. No one denies that. But it should not be someone's time because a doctor or hospital decided to take away their effective life-sustaining care in order to hasten their death because they didn't think that life was worth living or had value. This is a distinction with a difference. What TADA allows doctors and hospitals to do is eugenics and euthanasia, which are not moral or ethical. Nor should this practice be legal.

Let us pray for the repose of Mrs. Jones' soul and for comfort to her family in their time of loss and grief. As we say in Orthodoxy: Memory Eternal! ☦

I will now add her to my diptychs for the reposed, as I have Chris Dunn, other actual or would-be victims of TADA, my own family members, friends, etc., as is the practice of Catholics and Orthodox alike.

Let us also offer prayers of thanksgiving for Texas Right to Life and those who worked to help the Jones' - whether they donated, prayed, helped in the transfer of her - or did some combination of things; the other families put in harm's way by this law (and it's happening continually); and those that utilize it. We must never cease to be grateful and thankful. Perhaps you could even make a donation to TRTL in honor of Mrs. Jones. Let us also pray incessantly for this law to be abolished one way or the other.

Thanks for reading!
Posted by Kassi at 4:25 PM

Here's an update on Carolyn Jones, a victim of Texas' 10-day Rule in the Texas Advance Directives Act ("TADA"), who was literally rescued from the jaws of death by Texas Right to Life. I covered that saga here many times. It came during our efforts to repeal that part of the law which, as you know, the Usual Suspects opposed time and time and time again.

I am happy to share with you that Texas Right to Life reports that Mrs. Jones has been "moved to a long-term nursing facility where she will be allowed to heal without a countdown placed on her life - thanks to YOU!" (Emphasis by TxRTL.)

I am so happy about this. Add this to the things we can learn from how this case was handled by TxRTL, mishandled by the others, and what it showed us about who supported what in the legislature and in the real world.

Let me just re-post here what I said there as the key take-aways:

So what are we to conclude; what have we learned here?

That the doctor(s) who went to the medical ethics committed at MH were wrong that Mrs. Jones was futile or someone who should not be treated? Yes. That the medical ethics committee was also wrong in rubber stamping that decision? Yes. That this procedure does not yield infallible results? Absolutely. That maybe there's a bit of an outcome based decision-making process? That's fair. That once they make a decision, that even when it appears that they are wrong, we can't count on them to reverse course and do the right thing even when a life hangs in the balance? I think the facts here speak for themselves. That maybe there should be a longer timeframe so that mistakes like this are not made with more Texans? No doubt about it. That maybe if there was some due process in the law, a check and balance, that hospitals might be more careful and mistakes would not happen? Of course, that's why we have due process in the law when it comes to criminals. It should be here for the ill and disabled as well.

That is even more true today.

But SB 2089 still died - even in the wake of Mrs. Jones' case - as egregious an example of the usage of TADA as we've seen in the public. It was opposed by the Usual Suspects even after the Jones case came to light - which just added to the shamefulness of their positions. (By the way, did you see any of them fundraising for Mrs. Jones? Yeah, me either. As I often say, by their fruits, you will know them. All of them.)

There was also no real (or even faux) commitment to life in the House of Representatives in Texas by the leadership including especially Speaker Bonnen, who thinks that working on real pro-life legislation with real pro-life groups was a waste of his time. I guess he was just being polite when he hugged a child with Downs syndrome (who testified in favor of SB 1033, no less!) and acted like he gave a care about unborn children with disabilities who would have been saved by SB 1033. Remember that.

Bonnen reminds me very much of one of my favorite scenes from the classic movie, The Hunt for Red October:


But Bonnen has not been smart. He forgot about the last part of that - he hasn't kept his options open. Not with the grassroots. And not with organizations like Texas Right to Life. Among others.

I'm honestly not sure how much commitment there was by those who are not in leadership positions but voted for this leadership. How many of them pushed behind the scenes for this legislation to get to the floor? I don't know, but I can't imagine many. From what I've been reading, too many of them were running scared - afraid of the "Blue Wave" they foresee in the next election. They're not being smart either. As I tweeted recently: 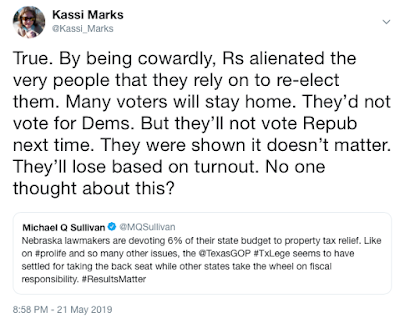 When the Blue Wave comes, it won't be entirely (if much at all) because voters shifted left. It will be, in a great number of cases, because the Republicans - including many of the so-called conservatives -  alienated their base who will stay home rather than vote Democrat/pro-abortion or for the lackluster incumbent. It's Lucy and the Football. A good many of us will say, "No thanks" when it comes to voting for incumbents that lost their spines once elected, if they possessed them before. What is needed is robust primaries in 2020 and new leadership in 2021. But Bonnen is already threatening people who primary others. Nice guy, huh? That seems a lot like Chicago politics to me.

God help them all. They will have blood on their hands from the death of SB 2089 as well as SB 1033 - lives at both ends of the pro-life spectrum will continue to be taken needlessly because of wolves in sheep's clothing in political offices and who head and lobby for organizations that lie about what they represent.

She was saved by Texas Right to Life and its tremendous number of supporters who rose to the occasion with gifts of prayer and money and social networking to get the word out.

Remember: We err, if we are to err at all, on the side of life. Always. TADA errs - certainly - on the side of death by passive involuntary euthanasia. It must be stopped. Efforts are still under way. Please pray for them. Pray for those families in its crosshairs. Pray for those working to end it. Please pray for those who are lost on this issue. And, please consider adding TxRTL to those organizations to which you regularly give. They are most worthy and deserving.